Native Voters at the Forefront of the 2020 Election

The recent presidential election underscored the importance of an often-overlooked group—indigenous voters. Multiple news outlets lauded Native voters as key to President-elect Biden’s narrow victory in decisive states like Wisconsin and Arizona. One news source suggested Biden won 98% of the Native vote in Arizona (in comparison to 51% of the vote statewide). Similarly, Dr. Len Necefer, an assistant professor at the University of Arizona and Navajo Nation member, estimated that 76,000 of 86,000 registered Navajo voters cast a ballot and approximately 74,000 voted for President-elect Biden. This increased turnout is largely due to the efforts of Native activists and grassroots organizations to register voters, provide voting resources, and create media campaigns which mobilized indigenous voters. 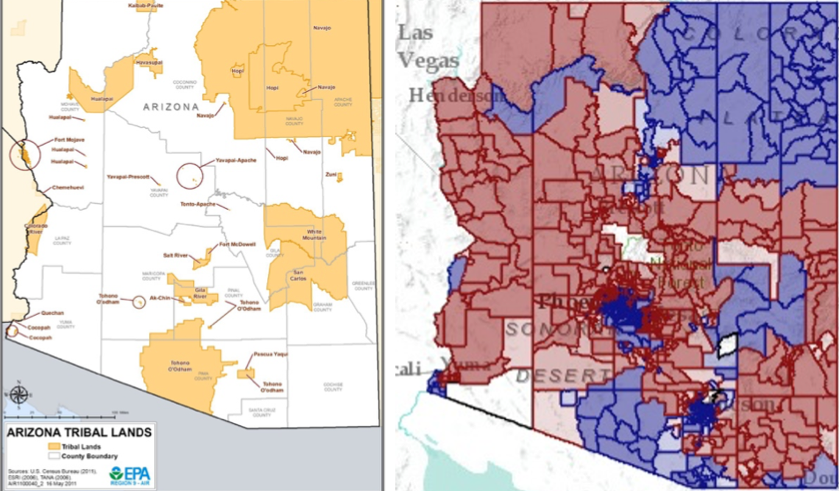 On the left is a map of Arizona tribal lands. On the right is a map of the results of the 2020 presidential election in Arizona by precinct as of Nov. 4th. Environmental Protection Agency (left) and Garrett Archer/ABC 15 Arizona (right).

Historically, Native Americans have faced substantial legal and socioeconomic barriers to voting in states (through measures like residency requirements, mandates to abandon tribal culture, and literacy tests) and from the federal government (through forced assimilation policies). In fact, Native voters did not receive the full protection of the Fifteenth Amendment until tribes were provided with a federal right of action by the Voting Rights Act of 1965 (VRA) and the language assistance provision of 1975. Since the implementation of the VRA, various tribal groups have brought seventy-four cases in fifteen states to enforce voting rights. The Native plaintiffs in these suits succeeded in sixty-eight cases, partially succeeded in two cases, and lost only four. These considerable litigation successes only further emphasize the prolific obstacles tribal members faced when voting.

Although Native groups have successfully utilized the VRA to remove a number of legal barriers to voting, Native voters still lack sufficient access to voting resources including voter registration websites, polling locations, drop boxes for ballots, and translated materials. A recent federal suit in Arizona brought by members of the Navajo Nation highlights many of these ongoing hurdles.

In August, six members of the Navajo Nation filed a complaint in the District Court for the District of Arizona alleging Arizona’s ballot receipt deadline violated Section Two of the Voting Rights Act (prohibiting voting practices which discriminate on the basis of race, color, or membership in a language minority group), the Fourteenth Amendment’s Equal Protection Clause (stating “no State shall . . . deny to any person within its jurisdiction the equal protection of the law), and the Arizona Constitution’s election clause (prohibiting any civil power from interfering in the free exercise of the right of suffrage). Since 1998, Arizona law has required mail-in ballots to “be received by the county recorder or other officer in charge of elections or deposited at any polling place in the county no later than 7:00 p.m. on election day.”

The plaintiffs moved for a preliminary injunction which would require Defendant Secretary of State Katie Hobbs to count any vote-by-mail ballots sent by Navajo Nation members living on-reservation that are postmarked by Election Day, November 3rd,and received on or before November 13th, 2020.

The Secretary of State’s Office did issue recommendations for Arizona voters in tribal communities, stressing the importance of returning mail-in ballots by 7:00 PM on November 3rdand suggesting rural voters build in additional time to return their ballots by the required date. However, the recommendations only briefly mentioned obstacles tribal members have historically faced when voting by mail.

In support of their motion, the Navajo Nation members argued Arizona’s receipt deadline burdens Navajo voters because the voters have less time to consider their ballot compared to the average Arizona voter. Additionally,theplaintiffs noted reservation residents face numerous obstacles to voting by mail including language barriers, lack of home mail service, insufficient access to vehicles and public transportation, and limited access to post offices due to distance and reduced hours.

The members provided evidence that reservation residents’ mail-in ballots take “disproportionately longer” to reach the county recorder’s office due to slower mail service, and residents have far fewer ballot drop-off locations (compare Scottsdale—which has one election-day polling location per thirteen square miles—to the Navajo Nation—one polling location per 306 square miles). The New YorkTimes noted the Navajo Nation has twenty-seven postal locations over 18,000 square miles, “roughly the equivalent to having 13 mailboxes in all of New Jersey.”

The district court ultimately held thatthe Navajo Nation members failed to demonstrate a disparate burden for Navajo voters living on the reservation. The plaintiffs did not show that Navajo voter ballots are “disproportionately thrown out” due to the deadline or that delivery time frames for ballots and availability of polling locations burdened Navajo voters more than similarly situated rural voters. The court also noted Navajo voters had alternative options like voting in person or by drop box.

The plaintiffs appealed to the Ninth Circuit in the weeks preceding the election. The Ninth Circuit affirmed the district court’s ruling and further concluded the plaintiffs did not have standing to sue because the complaint demonstrated only general obstacles and failed to establish that the plaintiffs themselves suffered a harm as a result of the mail-in deadline.

Additionally, both the district court and the  NinthCircuit noted the plaintiffs’ requests were not practicable because: (1) the country recorder had no way of determining whether a postmarked ballot came from a Navajo Nation voter living on the reservationand (2) the U.S. Postal Service often does not postmark mail-in ballots and the court could not compel USPS to do so via the lawsuit.

Despite the unfavorable ruling, the Ninth Circuit panel was sympathetic to the plaintiffs’ obstacles and left the door open for future plaintiffs to challenge the receipt deadline after the election with a more particularized showing of injury.

The Future of Native Voting

Although Native litigants have achieved remarkable success utilizing the VRA in the past, the Supreme Court’s ruling curtailing the Act in Shelby County v. Holder and the Ninth Circuit’s ruling in Yazzie suggest Native American voters need to seek remedies outside of the federal courts. Arizona’s Native voters succeeded in making their voices heard in the 2020 election despite the considerable obstacles outlined in Yazzie. But future elections shouldn’t require this much effort. Given the current spotlight on Native communities’ voting power and President-elect Biden’s commitment to “ensure Native Americans can exercise their right to vote,” now is the time to petition Arizona and congressional legislators to provide additional voting resources to Native communities. Arizona, especially, should re-evaluate the ways in which lack of access to mail-in ballots disenfranchises Native voters.

There are approximately 6.8 million Native Americans in the United States and approximately 4.7 million are eligible to vote. Only 66% of the indigenous population is registered to vote and there may be as many as one million unregistered,eligible Native voters. America took notice of Native communities’ impact in key states in 2020. These communities’ voting power will continue to increase. It’s past time to ensure that tribal communities’ access to the resources necessary to fully exercise their voting rights increase as well.